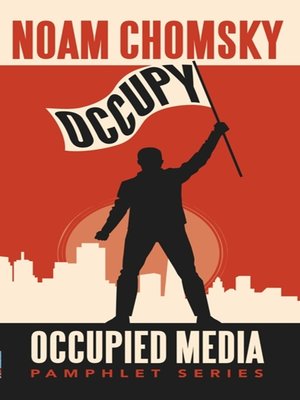 “Easy to read, affordable, loaded with photos and practical advice for activists, “Occupy is another vital contribution from Chomsky to the literature of defiance and protest, and a red-hot rallying call to forge a better, more egalitarian future….[an] excellent read.”
-Alternet

Since its sudden appearance in September 2011, the Occupy movement has spread to thousands of towns and cities across the world. For some it’s the economy. For others, it’s something deeper. Through relentless organizing and ongoing civil disobedience, the movement now occupies the global conscience as its influence spreads from street assemblies and protests to op-ed pages and the corridors of power. From the movement’s onset, Noam Chomsky was there, offering his voice, his support, and his detailed analysis of what’s been going down and what might be done.

In Occupy, Chomsky presents his latest thinking on the core issues, questions and demands that are driving ordinary people to protest. How did we get to this point? How do the wealthiest 1% influence society? How can we separate money from politics? What would a genuine democracy look like? How can we create new institutions to increase freedom and equality for all? Following the old course, says Chomsky, isn’t going to work. If we continue to follow the model of growth set for us by the 1%, we’ll be “like lemmings walking off a cliff.” The only alternative is to get involved and fight for a better future. If not now, when? If not us, who?

Occupy also features graphics by R. Black, photography by Alex Fradkin and Stanley Rogouski, and a “What To Do If You Get Arrested” guide for protestors written by The National Lawyers Guild. Read this book if you want to do something to fight back against corporate influence and government control.